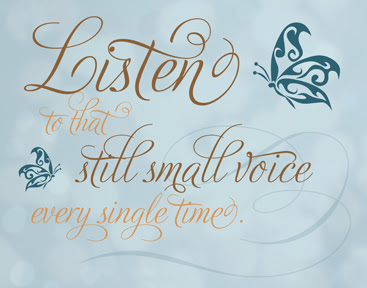 Elijah is one of the strongest characters in scripture. He confronted hundreds of false prophets, called down fire from heaven, and defied the “secular government” of Ahab and Jezebel. Yet when he was threatened by Jezebel, he beat feet to the wilderness to hide in a cave. Apparently, he sat out there for weeks bemoaning his miserable condition and his loneliness.

The story of his sojourn in the wilderness has many interesting details that represent significant lessons for we who are chasing after YHVH. But the culmination of his self-imposed exile comes when YHVH tells him, “Come out, and stand on the mount before YHVH.” (v. 11)

There is wind, then earthquake, then fire – all three phenomena that represent the power of YHVH elsewhere in scripture – but here the passage says “YHVH was not in [them].” Instead, there came next a “still, small voice,” or, as the Tree of Life Version has it, “a soft whisper of a voice.”

It is at that point that Elijah covered his face and emerged from the cave in which he was hiding. [Reminds me of the resurrection of Lazarus, but that is another story.] “Then,” the scripture declares, “all of a sudden, a voice addressed him and said, “What are you doing here, Elijah?”

YHVH loves to ask us questions. He always already knows the answers, but He asks anyway. Why do you think He does this? I think in this case He wanted Elijah to confront his condition, his state of mind.

Essentially, the Creator allowed Elijah to wallow in that stew of emotions – fear, pity, loneliness, anger – for a while; and He took care of Him through all of it. Finally, though, YHVH said, “OK, Elijah. That’s enough. Let’s go! I’ve got work for you to do.”

Father showed some of the ways He could rage and roar and burn and shake Elijah to his core. Then, He quietly and gently called Elijah out, calmed him, and gave him instructions for what was coming next.

God may let you hide in a cave for a while, but not forever. He has work for you to do. Listen for his instructions. They may very well arrive in the form of a “soft whisper of a voice.”

While spending time reading, meditating, praising, praying, and fasting during the forty days of personal change, I’ve listened closely for the guiding voice of my…

Misplaced trust. Disappointment, disillusionment. Faith, not works. We can find ourselves feeling devastated, deeply disappointed and disillusioned, when we have worked very hard, investing much…